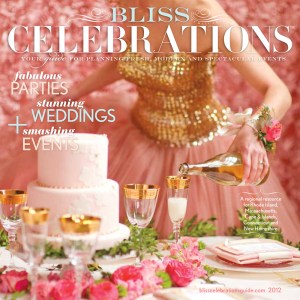 Last week the 2012 issue of Bliss Celebrations hit the newsstands. We just got our hands on a copy and are ecstatic to see that we have four features in this gorgeous publication including both real weddings and events!

The magazine is a “guide for planning fresh, modern and spectacular events” including New England weddings, bar and bat mitzvahs, private parties, charity events and more. 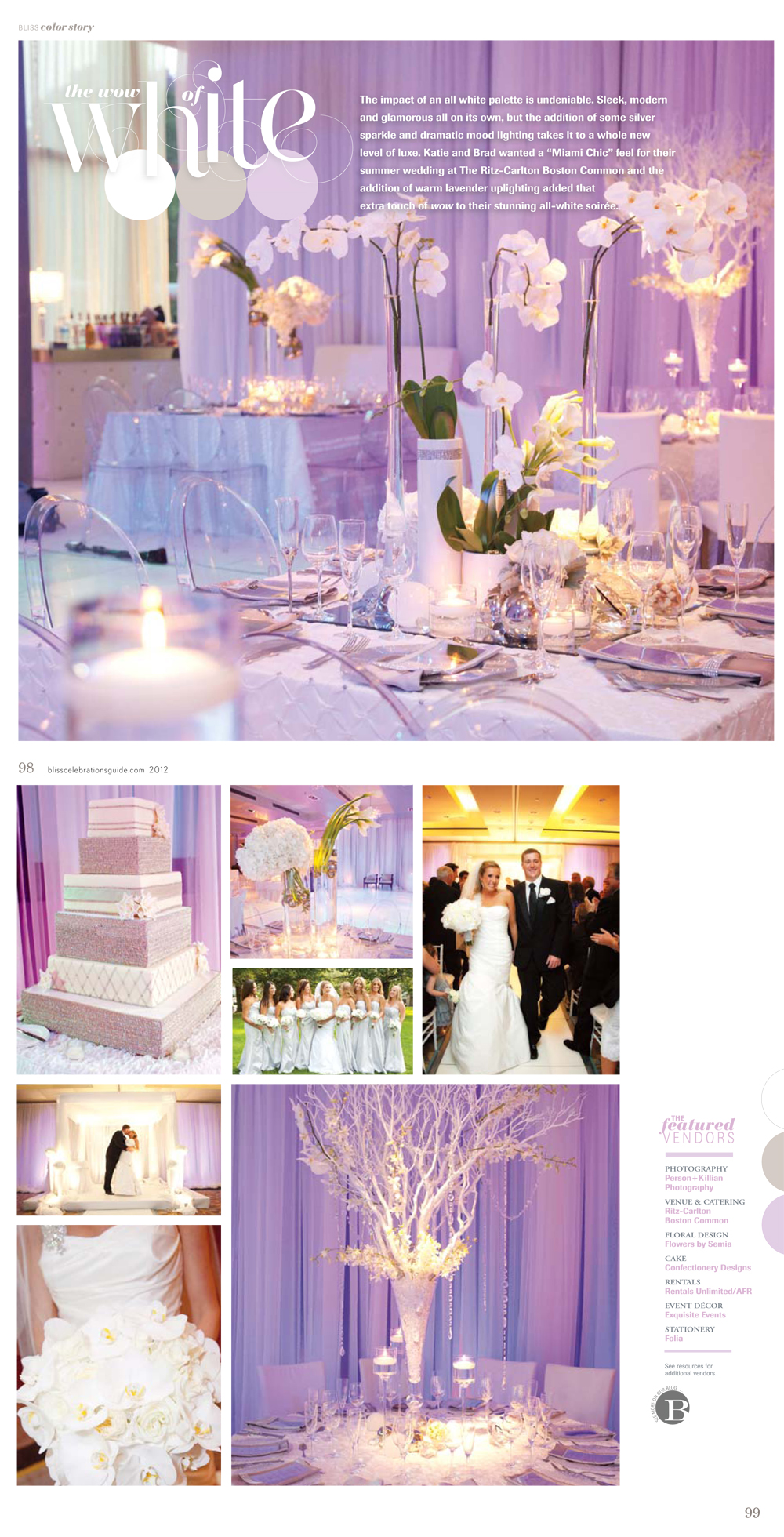 The impact of an all white palette is undeniable. Sleek, modern and glamorous all on its own, but the addition of some silver sparkle and dramatic mood lighting takes it to a whole new level of luxe. Katie and Brad wanted a “Miami Chic” feel for their summer wedding at The Ritz-Carlton Boston Common and the addition of warm lavender uplighting added that extra touch of wow to their stunning all-white soiree. 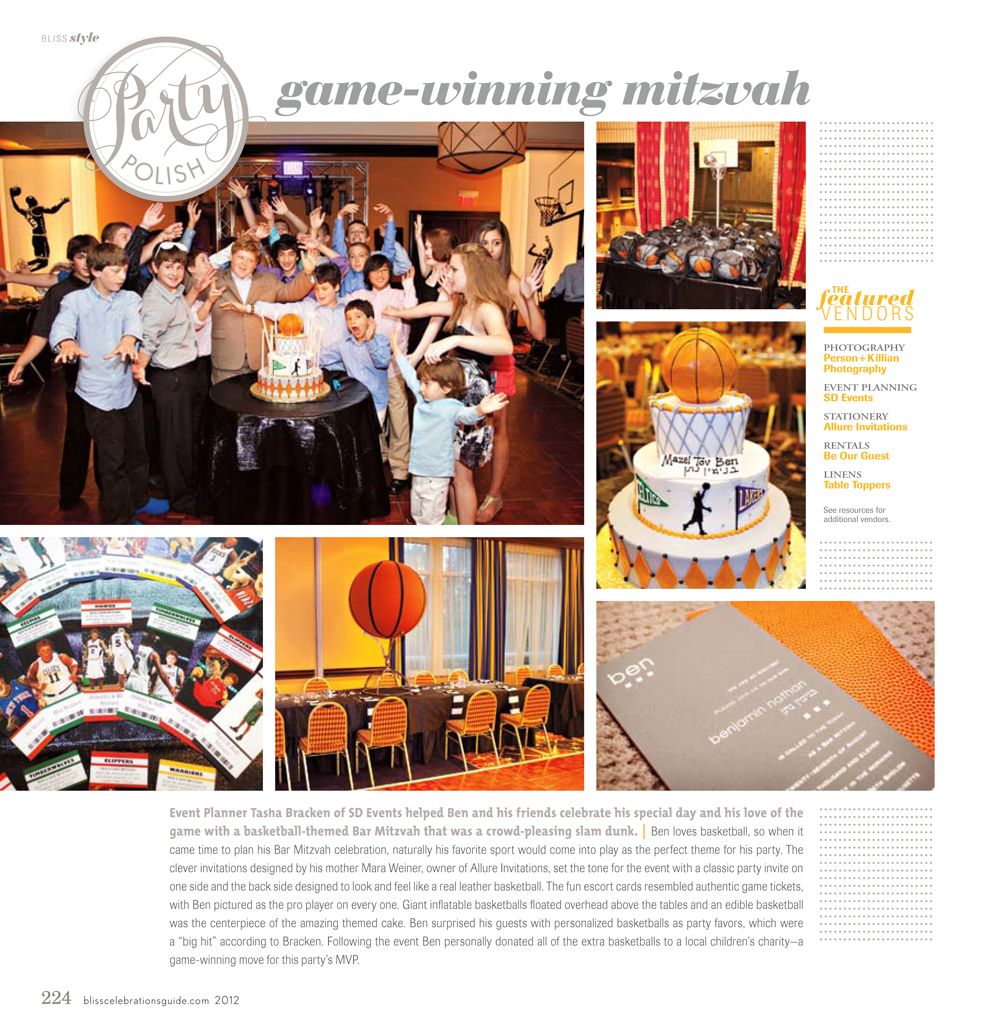 Event Planner Tasha Bracken of SD Events helped Ben and his friends celebrate his special day and his love of the game with a basketball-themed Bar Mitzvah that was a crowd-pleasing slam dunk. Ben loves basketball, so when it came time to plan his Bar Mitzvah celebration, naturally his favorite sport would come into play as the perfect theme for his party. The clever invitations designed by his mother Mara Weiner, owner of Allure Invitations, set the tone for the event with a classic party invite on one side and the back side designed to look and feel like a real leather basketball. The fun escort cards resembled authentic game tickets, with Ben pictured as the pro player on every one. Giant inflatable basketballs floated overhead above the tables and an edible basketball was the centerpiece of the amazing themed cake. Ben surprised his guests with personalized basketballs as party favors, which were a “big hit” according to Bracken. Following the event Ben personally donated all of the extra basketballs to a local children’s charity—a game-winning move for this party’s MVP. 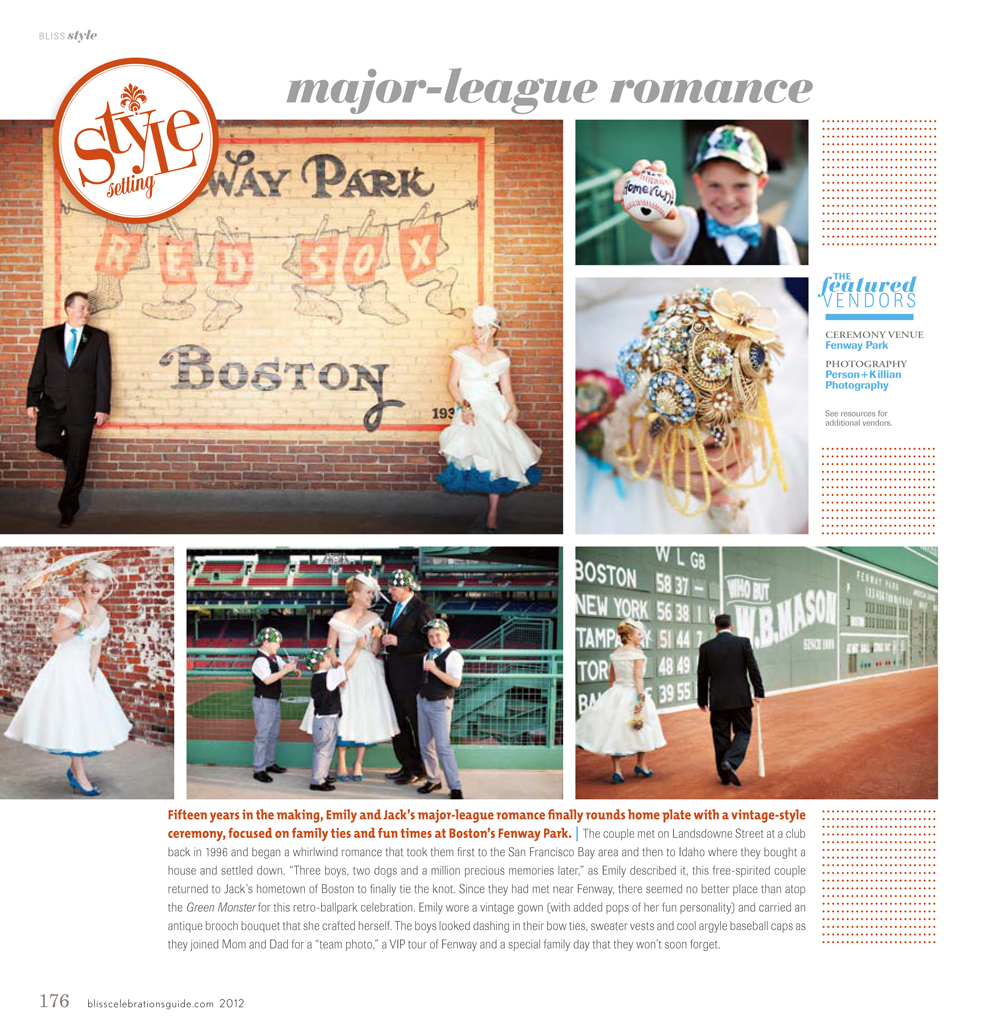 Fifteen years in the making, Emily and Jack’s major-league romance finally rounds home plate with a vintage-style ceremony, focused on family ties and fun times at Boston’s Fenway Park. The couple met on Landsdowne Street at a club back in 1996 and began a whirlwind romance that took them first to the San Francisco Bay area and then to Idaho where they bought a house and settled down. “Three boys, two dogs and a million precious memories later,” as Emily described it, this free-spirited couple returned to Jack’s hometown of Boston to finally tie the knot. Since they had met near Fenway, there seemed no better place than atop the Green Monster for this retro-ballpark celebration. Emily wore a vintage gown (with added pops of her fun personality) and carried an antique brooch bouquet that she crafted herself. The boys looked dashing in their bow ties, sweater vests and cool argyle baseball caps as they joined Mom and Dad for a “team photo”, a VIP tour of Fenway and a special family day that they won’t soon forget. 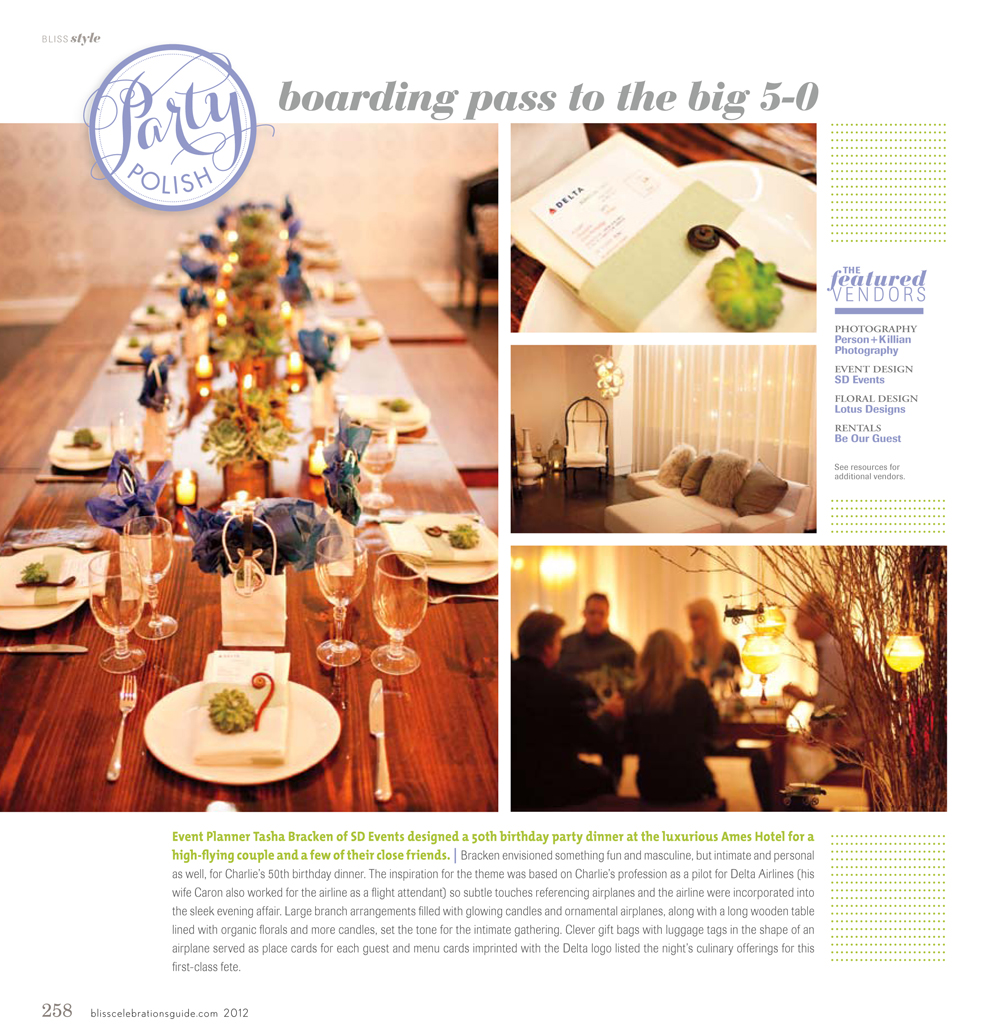 Event Planner Tasha Bracken of SD Events designed a 50th birthday party dinner at the luxurious Ames Hotel for a high-flying couple and a few of their close friends. Bracken envisioned something fun and masculine, but intimate and personal as well, for Charlie’s 50th birthday dinner. The inspiration for the theme was based on Charlie’s profession as a pilot for Delta Airlines (his wife Caron also worked for the airline as a flight attendant) so subtle touches referencing airplanes and the airline were incorporated into the sleek evening affair. Large branch arrangements filled with glowing candles and ornamental airplanes, along with a long wooden table lined with organic florals and more candles, set the tone for the intimate gathering. Clever gift bags with luggage tags in the shape of an airplane served as place cards for each guest and menu cards imprinted with the Delta logo listed the night’s culinary offerings for the first-class fete.

Without a doubt - the coolest and most creative ce

Sharing the love from this beautiful @bostonharbor

What a venue! Loved working at the @bochcenter alo

Summer weddings are not over yet! Congratulations

That JUST MARRIED feeling 🙌🏽! So unbelievabl